An addictive alternative to a traditional American breakfast or brunch is dim sum. Like sushi, dim sum encompasses a wide variety of dishes; steamed or baked buns and dumplings are the most familiar branch of dim sum that have even made it onto large chain restaurant appetizer menus. Buns, dumplings, or flaky pastry pockets can be stuffed with savory or sweet fillings ranging from slow-roasted barbecue pork to creamy egg custard. Shumai are also a type of dumpling, but they look more like little wontons.

Lam’s Garden’s fresh dim sum starting at 11:00 a.m. served by speedy waiters and waitresses on carts. Even the indecisive will find something that peaks their interest on one of the many carts. Since dim sum is served in small amounts with three to four small servings per plate, everyone at a table can try one dumpling and pass the rest along to friends. Michael, Mega Yummo, Al, Adam, and I arrived before the lunch rush and got to work. A few of us started the meal with hot tea, and in a few minutes almost every inch of the Lazy Susan on our table was covered with steaming little plates of dim sum.

Two dim sum steamers of pork and mushroom shumai topped with roe met their end first. The pork filling was light and savory, and the outer wrappers were moist and glistening from the steamed carts. The small bowl of tripe with steamed vegetablescaught my eye, but disappointed my taste buds. 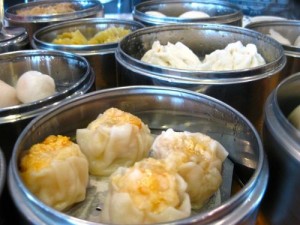 The tripe was bland and the thicker bits were slightly chewy. I think I’m definitely more of a pickled tripe and vegetables fan. The stars of the table for me personally were the steamed barbecue pork buns, which were the white, fluffy looking sachets of yum. Inside the steamed fluffy outside was a sweet and savory barbecued pork. I could easily have a whole meal’s worth of those buns!

The smaller, white, round dumplings were the delicious steamed shrimp balls. The outside was a delicate with an almost vermicelli noodle consistency, and the dumpling was filled with as much shrimp as possible. Several plates of shrimp balls could easily disappear in one sitting, especially with a little soy and hot chili sauce.

Soupy dumplings were wrapped in the same outer layer as shrimp balls, but they were longer and folded over like mini burritos. The pork filling and savory broth complimented each other well, but were slippery and trickier to eat with chopsticks than their shrimp marble-shaped counterparts.

I ramped down my dim sum experience with flaky pork pockets and lightly fried taro buns. The pork pockets were savory on the inside and topped with toasted sesame seeds. The taro buns were light and delicately crunchy on the outside, but the taro filling had a nice consistency of thick mashed potatoes. 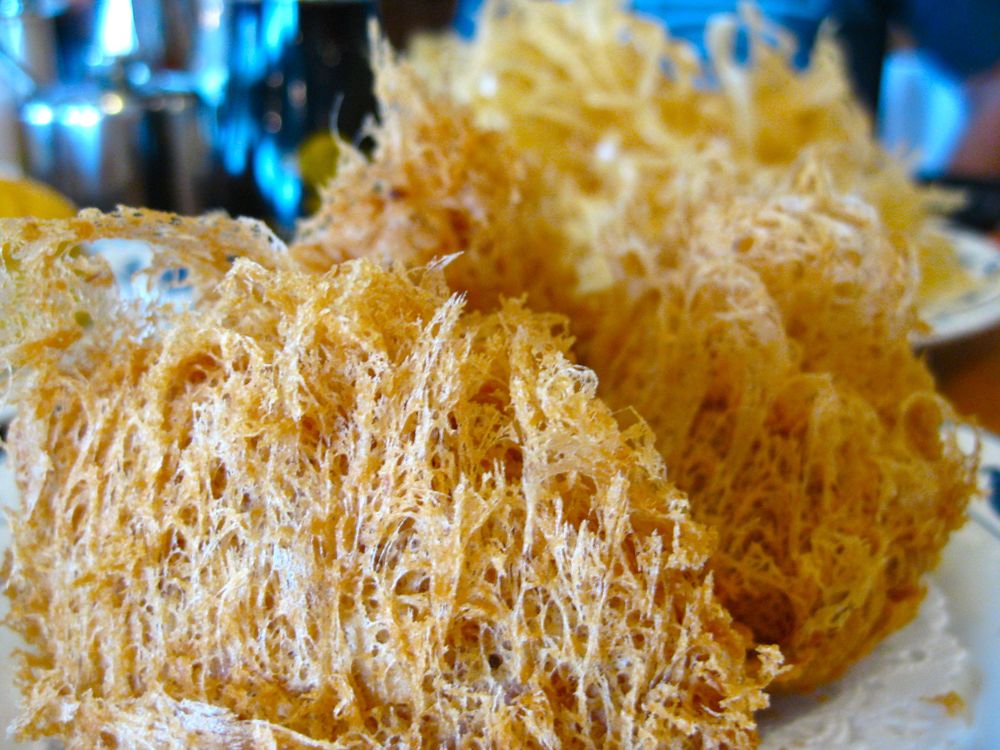 Since I grew up loving the Puerto Rican ñame, I’m no longer surprised that taro is one of my favorite Asian vegetables. There was only so much room for dessert at this point, so the baked egg custard buns with cookies baked on top were our final dim sum draft pick. These sweet custard-filled bits of goodness were some of the best dessert buns I’ve ever had — sorry custard pastry cups, maybe next time. 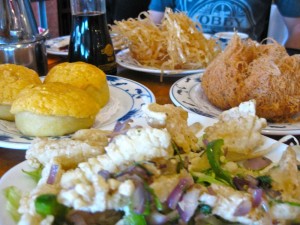 Lam’s Garden has served great dim sum every time I’ve visited with the small exception of the barbecued Phoenix Claws, or chicken feet, which are a little more flavorful at Chan’s. Two big tips I can offer about dim sum at Lam’s Garden is arrive as close to 11:00 a.m. for the freshest dim sum, and bring a huge appetite. One person’s total for dim sum may range from $12 to $15, which is about four plates per person and brings me to my final biggest dim sum tip: Bring friends to share as many different kinds of dim sum as possible!