Fill the Grill $20 in 20 Minutes Ultimate Chef Showdown: Round 1

Whole Foods Market, in partnership with fabulous local chefs, started a cooking competition on August 2 in which chefs shop and create dishes on-the-fly for a panel of three judges. Think Supermarket Sweep crossed with Iron Chef. One catch: Each chef is only allowed to buy $20 worth of groceries in Whole Foods. Game on!

The first round was an ultimate showdown between Chef Alec Cheak of Fleming’s Prime Steakhouse & Wine Bar and Chef John Rivers of 4Rivers Smokehouse. The arena was Whole Foods on Turkey Lake Road in Doctor Phillips Crossing. There were a sizable amount of spectators near the hot foods section where the chefs’ stations were located. Each chef waited with his own shopping cart at the starting line, and when given the signal, speed-walked to the fresh produce section.

Most of their items were produce and selections from the fresh seafood counter. The chefs were actually back at checkout with their groceries before the 20 minutes of shopping were over. Both Chef Alec and Chef Rivers’ grocery lists totaled a fraction under $20, which surprised me considering that Whole Foods isn’t the first market that comes to my mind when I want to stay under budget.

The second round will be on August 16 in the Whole Foods on Turkey Lake Road between Chef Tuan Tran of Crave and Chef Steve Saelg of The Crooked Spoon. The final battle will take place on August 30 between Chef Alec of Fleming’s and the winner of the second round. There’s no advanced registration, the event is free, and Whole Foods even provides free food or beverage samples. For the first round, Whole Foods offered free samples of their brand of pale ale and IPA beers during the first round. Don’t miss the second showdown and the opportunity to cheer on two more of our local chefs! 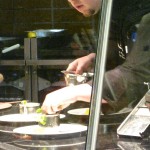 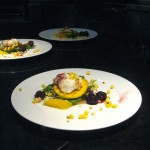