Early this week, my friend Marilyn extended an invitation for me to take her place in attending the Homegrown Cocktail menu launch at the Omni Resort at Champion’s Gate. I was glad to help out, especially after finding the menu online. After visiting New Orleans earlier this summer, I’ve been seeking out cocktails made with fresh ingredients and innovative recipes rather than the usual “101 flavored vodka drinks” that are so common these days.

My husband Mike and I sped down I-4 on the rainy Wednesday afternoon and arrived at the Omni Orlando Resort. The resort is right off of the interstate and easily visible with signs that mark the entrance and parking locations. Self-parking is $10 for the day and valet parking is $14. We made our way into the lobby and were greeted by gorgeous, sweeping views of the swimming pool and golf course.

The small setup for the cocktail menu launch party was located towards the left side of the lobby from the entrance. A preparation area was set up with video cameras to show the steps as the cocktails were prepared, along with samples of beers from two local breweries; Orlando Brewing and Lagniappe Brewing out of Minneola, Florida. Servers moved about the room with small bites; crab cakes with mango pico de gallo, antipasto skewers, and mini beef or chicken wellingtons. Mike sampled these for me and let me know that they were simple but well-made appetizers, especially since they were brought around on trays. We were warmly greeted by managers as we arrived, and we were invited to partake in the food and beverages. We gladly approached the stage where two bartenders awaited us. A musician played light classic rock songs on an acoustic guitar, which gave the lobby a bright and friendly atmosphere. Unfortunately, the event was a little under-attended, perhaps due to the persistent rain that day.

The two new Omni cocktails exhibited were the Southern Basil-Berry Smash and the Far East Mojito, along with Orlando Brewing’s Red Ale and Lagniappe Brewing’s Effenheimer IPA. In my typical fashion, I jumped into questions about the beverages as one of the bartenders prepared both cocktails for us to sample.

The first cocktail we sampled was the Southern Basil-Berry Smash. A whiskey smash is a cocktail that combines whiskey, lemon juice, mint, simple syrup, and bitters. This variation incorporated strawberries and basil leaves — one of my favorite cocktail combinations — with bourbon and dry sherry. The sherry was a unique and welcome addition to the beverage. Fresh lemon juice and simple syrup rounded out the cocktail, and then it was shaken and strained for us to enjoy. The end result was a well-balanced and refreshing cocktail that would be a perfect addition to casual outdoor dining or even an afternoon at the pool. As a bonus, Mike, who can’t bear the taste of bourbon or whiskey, loved the Southern Basil-Berry Smash. The recipe was provided by Omni, so I’m thrilled that I will be able to easily replicate this one at home! The Omni Orlando Resort also kindly provided the recipes for the cocktails Mike and I sampled, which are listed at the bottom of this post. 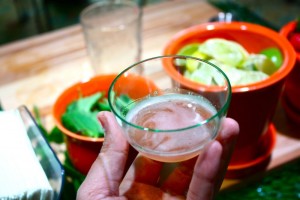 The bartender started preparing the second offering, the Far East Mojito, while Mike and I sampled the first cocktail. This beverage added ginger to the traditional mojito recipe, used Bacardi Limon as opposed to white rum, and simple syrup instead of granulated sugar. The ginger gave the cocktail a spicy zing that complemented the mint and lime juice very well, but in other respects the beverage was a well made rendition of the drink Mike and I know and love.

Two other cocktails on Omni’s new menu, but were unfortunately not exhibited during this event, are the Highland Pepper and the New Age Julep. The Highland Pepper looked similar to a margarita but with celery bitters — oh how I love unique bitters — grapefruit juice, and jalapeño added to the tequila and lime. The New Age Julep substitutes gin for the bourbon and adds an orange foam.

Along with the cocktails, Mike and I also tasted the two local brews. I wish I had better words for most of the Florida microbreweries, since I welcome the expansion of the craft brew market for the average consumer. However, Orlando Brewing Company beers are as a whole thin and unbalanced, and the Red Ale was no exception. We were hoping for a departure from the norm from the Effenheimer IPA, but it tasted nothing like an IPA — again, thin and unbalanced as OBC beers tend to be without any hop flavor. They were, however served in adorable shot glasses.

I’ve tasted a few beers from Cigar City Brewery, which is based out of Tampa, Florida, and I would love to see those spread through Orlando a bit more. I highly recommend Cigar City if you’re looking for a local beer, but I have not been enchanted by the other Florida microbreweries. Though the beers were disappointing, Mike and I were very pleased with the cocktail offerings from Omni. If you’re in the area or looking for fresh and unique cocktails with a beautiful atmosphere to surround you, the Omni Orlando Resort will not let you down.

Disclosure: The food and cocktail samples mentioned in this post were paid for by Omni Orlando Resort, although the views and opinions expressed in this post are purely that of the author, Kathleen Drozdowski, unless otherwise noted. This post was not reviewed by Omni Orlanod Resort in any way. 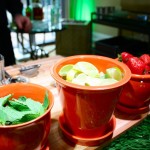 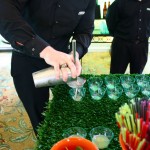 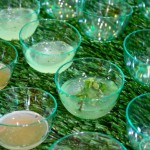 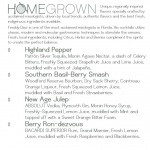 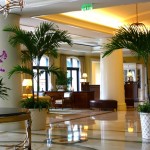 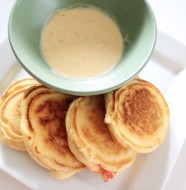