Fat Cat is a line of gourmet condiments and hot sauces that focus on the flavor of its fresh ingredients instead of sheer heat. Owners, Eyal Goldshmid and Deborah Moskowitz, started Fat Cat in their kitchen with vegetables from their home garden and flavor stories from childhood inspiration. They have since expanded Fat Cat from their kitchen and onto shelves at local Central Florida farmers’ markets and business, such as Delish New York Bakery.

Eyal graciously offered me a sampling of their line of hot sauces, and the first thing Adam and I did with our sauces was mix them into homemade burger sliders. There’s this misconception that hot sauces are all thin, runny, and liquified spice in a bottle. While I love sauces like Tabasco — Crystal Hot Sauce is a personal favorite — its texture and heat has a time and place, and these burgers sliders were not that time or place. I bought lean ground beef and added a little salt, pepper, and bread crumbs. Then, I made two sets of burger sliders; one set with Surprisingly Mild Guajillo Ghost and another set with Papaya Pequin Passion. Instead, the Guajillo Ghost sauce added a nice smokey note to the beef, although Papaya Pequin’s flavor disappeared into the beef. I added a large drop of additional sauce to each burger, and that’s when Papaya Pequin shone through the meat. The sweet, subdued heat of the Papaya Pequin could have been drawn out a little more by toppings like caramelized onions or bits of pineapple, which I didn’t have available at the time. Papaya Pequin also worked well later on as a dip for honey-baked ham.

Guajillo Ghost sauce had a thinner consistency than Papaya Pequin. Eyal mentioned that the guajillo sauce is the only Fat Cat sauce that contains powdered elements like ghost pepper and cumin. Ghost pepper is genetically manufactured meant to keep predators away from livestock, so puréed chunks of ghost pepper in a sauce would probably make me cry. Fat Cat put my ghost pepper preconceptions to rest because Surprisingly Mild dials down intimidating spice into a dark red, smokey sauce that goes extraordinarily well with burgers and other grilled favorites.

Eyal declared Purry-Purry Sauce a product of personal inspiration from his culturally diverse childhood meals with his Middle-Eastern father and Hispanic mother. His father always kept homemade spicy sauces at ready on the dinner table, and Eyal culled his family’s tradition of fresh ingredients into Purry-Purry Sauce. My first thought was, “A Purry-Purry Sauce and a Fat Cat Foods label — super adorable!” But piri-piri is a South African pepper and condiment, which has been mixed with several fresh vegetables like onions, tomatoes, ginger.

I tossed large shrimp with a little butter, garlic, and Purry-Purry for quick-but-tasty dinner with a side salad. Purry-Purry’s heat snuck up on me, but made a pleasant pairing with the plump, sweetness from the shrimp. Purry-Purry had this semi-thick texture from the fresh vegetables used in the sauce, and was the best example of Fat Cat Foods’ spotlight on their fresh ingredients. I’m still glad I had a side salad with cranberries and avocados to cool things down.

The sauce that gave me enjoyable Scoville-filled kick without singeing my taste buds was Mexican-Style Habanero. I mixed the habanero sauce in equal parts with Brianna’s Homestyle Classic Buttermilk Ranch Dressing, dipped my “fried” green tomatoes — made as mini pancakes with juicy tomato centers — and savored the result with eyes closed in delight and bliss.

Later on, I boiled a batch of wings and drummettes for fifteen minutes, and then baked the wings in an oven until golden and crisp.The wings were then divided into three different bowls and tossed separately in three Fat Cat Foods sauces; Caribbean Curry, Mexican-Style Habanero, and Surprisingly Mild Guajillo Ghost. The sauce that made the biggest splash with the wings was Guajillo Ghost, which coated the wings with smokey flavor and a subtle spice that the other sauces didn’t quite muster. The other sauces during the wings test were instantly hot, and the wings needed to be doused with more of each sauce to get a sense of the fresh veggies. 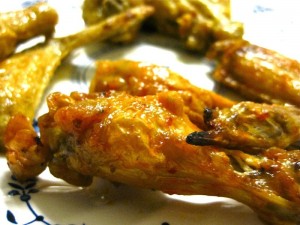 There are few sauces that Adam and I used more than the others during our mad scientist kitchen experiments; Mexican-Style Habanero, Papaya Pequin Passion, which was Adam’s favorite, and Surprisingly Mild Guajillo Ghost. The sweet papaya and the smokey Mexican spices in the latter two sauces were the most unique. I know I hadn’t even considered a ghost pepper sauce palatable until Fat Cat and their Guajillo Ghost sauce. My verdict? Fat Cat sauces are an easy way to incorporate a new style of spice into quick and tasty meals. 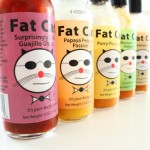 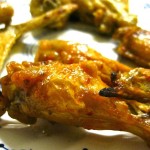 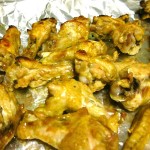 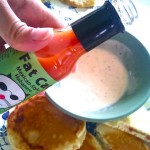 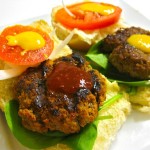