Epcot International Food and Wine Festival annually takes advantage of the beautiful Fall Florida weather and existing World Showcase pavilions to feature tapas-style dishes from around the world. There are several new booths this year, including Hawai’i, Caribbean Islands, Scandinavia, and Portugal, which also includes a Portugal Wine Bar. I’m a little sad that Puerto Rico, which has been around since 2005, has been retired this year, but Caribbean Islands is doing a good job of representing both Hispanic and African American influences with the ropa vieja and jerk chicken dishes. There is also a traditional queso flan at the Mexico booth.

Ocean Spray also joins the ranks this year with a fantastic cranberry bog right in the middle of the path to the World Showcase. Stop and ask the experts all your cranberry questions — they’ll be the guys in the rubbery overalls standing in the middle of thousands of fresh cranberries! The bog embodies the spirit of learning at the core of Epcot and the festival experience. There are also a few less than steller changes, like the lack of a beautiful herb garden beside Belgium and a smaller chocolate lava cake at Ireland, but there’s also just as many yummy festival additions.

Hawai’i introduces not one but two can’t-miss items — a Kalua Pork Slider and a Tuna Poke with Seaweed Salad. The pulled pork on the slider is served on a small, fluffy bun with sour Dole pineapple chutney and spicy mayonnaise. I didn’t get any of the spicy notes of the mayo, but the chutney gave the slider a lightly sweet finish. I’m eager to try the slider again to see if there’s more spice to it on a later date. If I’ve learned anything about the festival over my dozens of visits, it’s that a dish may be so-so one day and steller another day.

I have an aversion to strong-tasting fish, but I loved the tuna poke! Sesame seeds added a slight dash of toasty flavor. The seaweed was sweet and coated in something that reminded me of eel sauce; it was sweet with a dash of soy sauce flavor. The lotus root chip garnish was a fun idea, but the chips didn’t have much crunch to them the day I had the tuna poke.

Adam almost fell over in shock when I proudly said that I also loved Canada’s Maple and Moosehead-Beer Glazed Salmon. Last year’s Canada menu featured a similar salmon dish with a maple glaze and a side of lentil salad. This year’s salmon saw a slight tweak with the addition of Moosehead Beer and a refreshing barley salad. Again, the salmon’s flavor was mild and complimented by the slightly crisp outer layer of maple glaze. The beer didn’t add anything remarkable to the glaze on the salmon, but the chilly barley salad a crisp bits of veggies was perfect for the warm Florida weather. Canada’s Chicken Chipotle Sausage is unexpectedly super spicy, so approach with caution, but the accompanying sweet corn polenta helps off-set the spicy sausage. I wouldn’t revisit the chicken sausage anytime soon.

For some strange reason the Kerrygold Cheese Selection at Ireland didn’t stand out as much as last year. I suspect the reason the Kerrygold was blander than I remember was because I had Greece’s Griddled Cheese moments before. The griddled cheese was super salty, drizzled with honey, and topped with pistachios. I wish my griddled cheese had a little more honey because it was really that salty. Ireland’s apple chutney, which is served with the cheese selection, is good, but I wouldn’t suggest getting the cheese plate during a one-day visit at the festival.

A big highlight for me in terms of sheer portion size was France’s Coq au Vin. This dish is served in a savory brown sauce with plump mushrooms and sweet pearl onions over cheesy macaroni gratin. The coq au vin was a solid festival offering, but there was more macaroni on my plate than chicken. Still, I will miss France’s braised short ribs in Cabernet that I ate many times over the course of last year’s festival.

Scandinavia and South Africa offer two plates that could be complete hits or misses depending on the person; the Taste of Scandinavia and Seared Filet of Beef. Adam took charge over the Taste of Scandinavia, but I was surprise at how pleasant the cured salmon was with a side of sweet mustard. Fresh dill balanced out the possibly mayo-based sauce in the shrimp salad. The herring was a tough sell for me, but nothing that a sip of sweet Xanté liqueur couldn’t fix. South Africa’s seared filet of beef was slightly salty and served over a large helping of sweet potato. The meat was tender, but beyond that, I just couldn’t get past the salty and extremely sweet flavors of this dish.

Food has dominated my festival experience so far, but I did slip in a beer flight at the Craft Beers booth. The Widmer Hefeweizen (Sweet, Berry) andLeinenkugal (Belgian Pale Ale) were both light on hops and smooth on the palate. The Festival Center is home to a very Rosa Regale-style rose port, the Croft Pink Port, that has all the flavor notes of a port but half the body. Japan’s Junmai Ginjo Masumi Sake is served cold and has the nearest hint of flavor, which is also smooth and palatable. The Tokyo Sunset maybe had a little too much ice because the flavor was bland and mostly tasted like watery pineapple juice. The Singapore Sling was just as sweet and berry-flavored as I remebered. The cherry garnish was nice, but the Singapore Sling does not come near the formidable Happy Lychee in China this year.

Desserts and wine pairings will mostly likely dominate my next festival post, but there will also be mentions of a few savory plates that I managed to miss during my first few rounds! 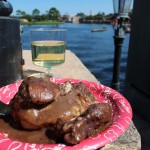 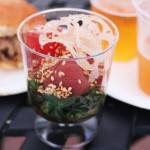 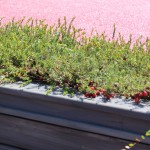