About ten years ago is when I saw my first Dave & Buster’s ad, but for the life of me I could not figure out why there wasn’t a Dave & Buster’s in Orlando. Now, we need not wonder any longer. On July 18, 2011, Dave & Buster’s Orlando opened its doors to the public, but the previous week Dave & Buster’s partnered with the Brothers and Sisters of Central Florida for a ticketed VIP pre-opening party that included an unlimited buffet, hors d’oeuvres, water, and sodas. Attendees’ tickets also included a $20 Power Card and two drink tickets.

The venue was two stories high; the first level was on-site parking, and the second level was where the fun lives. The second floor was accessible by elevator or an intimidating flight of stairs — careful on the way back down if you wear heels, ladies! The indoor lighting and décor were modern and minimalist with nearby restaurant-style seating away from the ruckus of the main gaming floor. 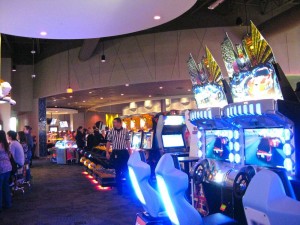 For the event, there were long hors d’oeuvres tables along the far wall beyond the bar with things like fruit, cheeses, crackers, cocktail shrimp, sauces, pot stickers, and desserts. There was also a buffet in the middle of the restaurant section filled with large breaded shrimp, Philly Steak Rolls, grilled lemon shrimp and chicken skewers. An ice sculpture, desserts, and fruit bouquets were also nestled between the silver catering trays. A similar buffet was set up in the showrooms in the far back behind the gaming floor, which is where Adam and I decided to settle down for a meal 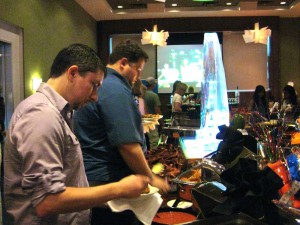 I started with the Breaded and Fried food group, which was represented on my plate by shrimp in cocktail sauce and a Philly Steak Roll. The shrimp were a larger version of what I would expect to find on any chain restaurant’s appetizer menu. The wrap, on the other hand, was a pleasant surprise; it was moist, yummy, and reminded me of a Philly Cheesesteak Sandwich in a spring roll. 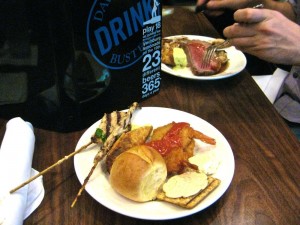 I brought another plate back to my table from the carving station with a few slices of a peppercorn roast beef with a peppercorn sauce. If the sauce weren’t a little on the sweet side, I would have bemoaned the peppercorn-on-peppercorn decision. The meat itself was tender, buttery in texture, and was easily sliced. I’m thinking the beef was met to represent the steak menu, which does offer a Peppercorn Sirloin Steak with Peppercorn Sauce. Spice-heads, this is the steak for you.

We later killed late-night munchies with a plate of Queso, Guacamole, Salsa and Chips, which I would definitely get again. The nacho cheese was thick and creamy, but didn’t solidify over the crunchy chips and spicy salsa. Adam and I later shared a piece of super-moist carrot cake and a chocolate chip cookie. The cake was dotted with nuts and topped with a delicious cream cheese frosting. The chocolate chip cookie was disappointingly more cinnamon than chocolate chip.

The drinks were impressively strong. Adam and I took turns sipping from a standard Cosmopolitan and a Lemon Drop. The Cosmo had a nice blush of sweet with a satisfying, underlying bite. The Lemon Drop was all bite! Think, vodka with freshly squeezed lemon accents. My night later slowed down with a Dave & Buster’s signature Million Dollar Margaritaon the rocks, and Adam enjoyed a draft beer. 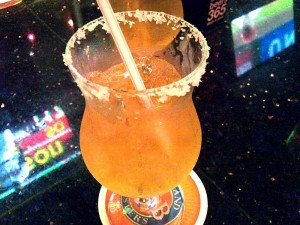 The margarita was nothing short of scrumptious, and will be the drinks beside which all other house drinks will be measured. I’m glad Dave & Buster’s has late-night happy hours and the Eat & Play Combo, which includes an entrée and a $10 gaming card for $15.99, because I will be back! Downtown Disney’s upcoming Splitsville will be opening to some steep competition.