By Marilyn, May 24, 2011, In Restaurants
Home » Restaurants » Shipyard Emporium in Winter Park

The high, wood-panelled ceilings and beams of Shipyard Emporium in Winter Park instantly relaxed me. The large windows daylight flood into the restaurant, so I was glad for a seat near the windows. To the left of the main doorway, there were racks of bottled and other Shipyard goods for sale, included stacks of Shipyard beer. There were long deli cases behind the hostess’ podium with fresh salads, pastries, and baked goods made fresh on-site. There is also beer brewed on site, which is overseen by Mr. Ron Raike, so there was no way I could walk out of Shipyard without trying a little something on draft.

A six-dollar beer flight of the Sea Dog Blueberry Wheat, Old Thumper English Red Ale, an American double IPA called A Little Bit of Peepee, and Ron’s Full Circle Stout were my introduction to Shipyard Emporium. The beers were cold, crisp, and with hardly a hint of froth but a steady fizz. The IPA had the expected strong flavors with that signature IPA zing. While the blueberry wheat was nice and light, my favorite of the bunch was the smooth Old Thumper.

sandwich was my beer flight’s co-star. This sandwich was a layered delight of melted Brie, roasted turkey, and orange cranberry sauce on ciabatta. The Brie was so melty that it would drip onto the plate with my every bite, so I’d sweep it up with a little of my potato salad. Brie and potatoes are a match made in heaven, by the way. I was a little scared that the potato salad would taste mostly like mayo, which has been my general experience with American potato salads, but I’m happy to say I was wrong. The red-skinned potato salad had a light hint of what was possibly a little sour cream? With a a little mayo, fresh dill, and a pinch of salt. 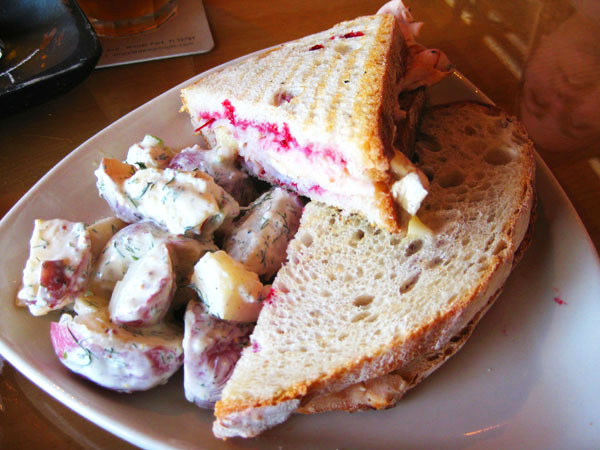 My lunch-mate, Danielle, ordered the Veggie Tar, which had grilled vegetables – portobello mushrooms, zucchini, roasted red peppers – with herbed goat cheese on ciabatta. From her reaction, I’d say the sandwich was a tasty keeper. She mentioned that the orzo salad had an overwhelming number of olives. Since we’re both not olive fans, the orzo was probably not going to be a hit with either of us. We unfortunately didn’t have any room for Shipyard’s fresh desserts this time. That just means I’ll have to start with dessert to accompany by beer flight instead of an entrée during my next visit.