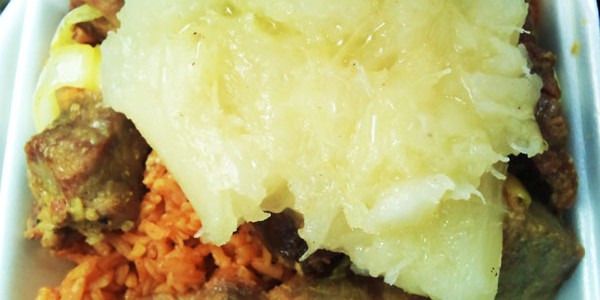 When looking for some heavy fare to hit the spot, there are few things that beat a traditional Hispanic hot deli counter. Martin’s BBQ on South Semoran does a good job of dishing out well-seasoned meats, pork, chicken, and sides, but today will be about Lechonera El Barrio Restaurant. This purveyor of general homestyle Spanish, Cuban, and Puerto Rican food is located on North Semoran just past the 408 East-West Expressway. They’re in a small stand-alone building with some indoor seating, although the room is tight quarters with little air circulation.

Their portions are generous, so I ordered a medium-sized to-go box of an entrée and two sides; cubed lechón asado, arroz amarillo con habichuelas rojas, and yucca con mojo. The rice was very near the flavor and consistency of my old school, Puerto Rican mom’s rice, if that says anything. The rice was soft and the beans were fell apart in my mouth – I felt like was eating a home-cooked meal already! The roasted pork was a little on the salty side, but tender and packed with all the right seasonings. Then, my glorious sundae of Hispanic eats was topped with a traditional style yucca with olive oil, garlic, and onions. I also had to order a non-alcoholic Malta India, one of my favorite semi-carbonated beverages as a kid. Malta is a little less carbonated than regular soda, has a strong malted flavor, and has a syrupy consistency.

Don’t expect to count carbs or watch a grease quota while dining at Lechonera El Barrio or any other homestyle Hispanic deli counter. Do expect the flavors and generous portions sizes of traditional Hispanic cooking. 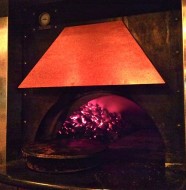