For the uninitiated, Enzian is an indie dinner-and-a-movie house on Orlando Avenue in Maitland, Florida. Enzian hosts the annual Florida Film Festival, and is home to many movies, both new and cult classics, that just can’t been seen on the big screen anywhere else. I’ve enjoyed the hummus, salads, fresh cookies, and beer inside the theater, yet, somehow I had never sat down for a meal at Enzian’s Eden Bar. The food menus inside Enzian and outside at Eden Bar are the same, but I was looking forward to a change in atmosphere.

Adam and I decided to arrive about an hour and a half early for the 9:15 p.m. showing of Super, and claimed a little bistro table bordered by large ferns and huge trees. The Enzian grounds are filled with beautiful old oak trees overgrown with Spanish moss. There was a slight breeze and a refreshing calm balanced by an eclectic music mix of everything from Lykke Li to Weazer.  I started with a pint of the Sir Perry Pear Cider, and Adam ordered a pint of the Left Hand Milk Stout — both were on draft, which makes a world of difference in flavor. The cider was sweeter than champagne and just as bubbly, while the stout reminded me of a smooth Malta India without the touch of syrupy sweetness.

Since I had had hummus and salads before, I needed something with a little more substance, so I order the Grilled Chicken Avocado Sandwich. The avocado cream sounded like it a cool touch, but the sandwich was actually spicy! The white chicken breast was evenly seasoned and juicy, and was served in a thick, fluffy bun. The sandwich also included a heaping pile of amazing Truffle Potato Chips, which are made in-house just like everything else on the Eden Bar and Enzian menus. The chips had a nice flavor combo of garlic and salt. The waitress let me know that for about $4, a single order of truffle potato chips are available inside the theater. Now truffle chips will replace popcorn whenever I’m watching a movie at Enzian.

Adam ordered the Pulled Pork BBQ Sandwich with a fresh tomato soup as his side. The sandwich was also served in the same kind of bun as the chicken sandwich, but was with layered with pickles instead of salad. The house-made barbecue sauce was served on the side. The sauce was more sweet than smokey, and the pork was super moist. The tomato sauce was smooth and slightly thick, but was served in a what looked like dip dish than a full-sized bowl.

The reasonable portion sizes inspired Adam and I to try the house’s specialty dessert, the White Chocolate Bread Pudding. Let me just say that I could see a movie and just order bread puddings the whole night. This dessert was fabulous! The bread pudding was cut into a square and served in the center of a wide dish in a pool of creamy white chocolate sauce. While the outside of the pudding was firm with a slightly browned top, the inside was warm and melty.

While I’m excited to go back and try the rest of Eden Bar’s menu — a few more pints of their draft beers and a bread pudding would suit for any occasion — I hope Eden has the opportunity to rotate a few menu items for more seasonal dishes. 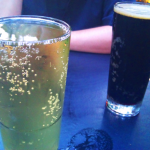