The magic of Chinese take-out is that I can get my order in fifteen minutes or less. The downside is that most Chinese take-out places I’ve ordered from don’t serve authentic Chinese, except for Eastern Pearl Chinese Cuisine and Magic Wok. For now, let me introduce you to Eastern Pearl. This restaurant is tucked away in a fairly new little plaza behind Denny’s off of SR 436 on TG Lee Boulevard, which is also known as Frontage Road. Bright red and gold lanterns line the eaves of the building, which is also home to a convenience store and tourist information center. Inside, Eastern Pearl is decked out in modern Asian-inspired décor in dark colors with a beautiful indoor waterfall. There’s also a private, enclosed corner dining area.

I’ve dined in before, and the lunch service is fabulous, but this time I ordered Chicken with Mango from the dinner menu as take-out. The lunch specials are mostly typical American Chinese take-out sprinkled with a few original dishes like the Tofu with Shiitake Mushrooms and Eggplant with Garlic. The portion sizes of both lunch and dinner entrées are enough for two people to have a full meal. I expected the chicken to be sweet, but instead it was savory with minced garlic. A large, fresh mango was cut into chunks and served with the strips of chicken in a light sauce on top of the thick mango skin. Cool touch for a take-out order!

The entrée also included steamed rice and a hot and sour soup — the crushed red pepper in this soup should be approached with caution! This is a hearty hot and sour soup with thick mushrooms, tofu, seaweed, and small chicken strips. I’ve had the wonton soup here too, and the house-made wontons always hit the spot. I also order a side of summer rolls, which I dipped in the juices of the chicken with mango instead of the peanut sauce – the salad filling was crisp, the shrimp was tender, and the vermicilli noodles kept their shape. I’m ready to go back and do a round of Eastern Pearl’s house-made dim sum, since I’ve only had the tasty soupy dumpling. Eastern Pearl continues to rank as one of my personal favorite Chinese places in Orlando. 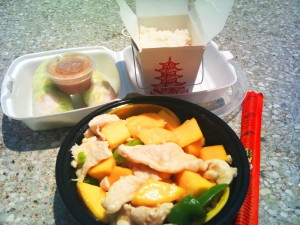